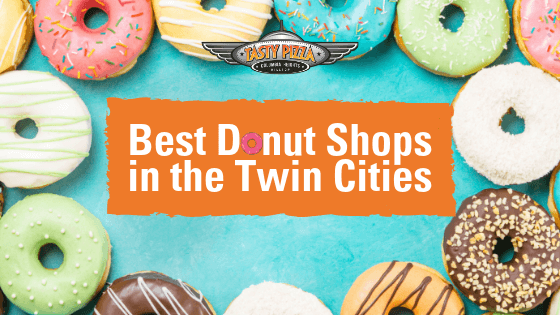 Fried dough with sweet toppings and fillings is a gift from on high. Nothing satisfies a sweet tooth faster than a light-as-air donut. If you’re in the Minneapolis and St. Paul area, you’re in luck. We may be known as the “Bread and Butter State,” but we’re convinced that’s only because we want to keep the amazing donut shops of the twin cities a secret all for ourselves. If you’re ready to indulge, these top sites for donuts will give you the most delicious sugar high:

Don’t think donuts can be glamorous? It’s only because you haven’t tried the made-from-scratch goodness known as Glam Doll Donuts. With flavors like Strawberry Malt and PB Hot Fudge Sundae, you can’t go wrong. They can even make upscale versions for a wedding, birthday or other event.

Though they specialize in mini donuts, Sleepy V’s also sells larger options if you crave more. With unique flavors (what do you mean you’ve never tried pepper on a donut?!) and delicious homemade, fresh dough, you’ll be coming back for seconds and thirds. Their versatile size makes them perfect for sharing.

We go bananas over Mojo Monkey Donuts, which have been featured on the Food Network. From classics to novel varieties, this is your spot if you want something special. Sample New Orleans-style beignets, filled Bismarcks, French crullers, yeast-based donuts, donut bars and more.

Cardigan Donuts has a legit donut laboratory to create unique flavors every day. Do donut scientists work in the lab? We have no idea, but it’s a dream job for sure. With flavors like Bourbon Apple Fritter and Blackeye Cake, we’re big fans of the science. And if you want something a little more healthy, Cardigan Donuts also serves yogurt and oatmeal bowls.

We’ve been known to lick the glaze right off our donuts, so we’re fans of Bakery Box, too, since they are known for their unique and amazing donut glazes. From the classic (and drool-worthy) brown butter glaze to really unique ideas like rose petal and pepper, this is donut nirvana.

Would you spend 18 hours making donuts? Well, you don’t have to, because Bogart’s Doughnut Co. does it for you, getting up at the crack of dawn to put on their brioche dough and whip up their homemade glazes. From Nutella donuts to lavender cake, this is a menu you’ll want to check out.

The aptly-named Angel Food Bakery will make you think you hear heavenly choirs singing from above. Everything is made in small batches from scratch and you can even watch the bakers hard at work on site. Everything from jumbo donuts to gender reveal donuts to vegan options are available here. The team can even put together donut messages in a box, with donuts shaped like letters.

Blood sugar dropping? Uh-oh. After you’ve feasted on the best donuts the area has to offer, you might want a full meal to balance out. We have you covered. Check out Tasty Pizza for lunch or dinner plans now! You can even order online if you’re too full of donuts to stop by.