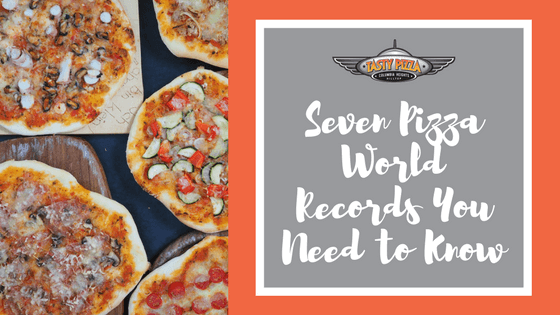 Only true connoisseurs will know these incredible pizza-related world records:

Dovilio Nardi and his team baked the largest round pizza in more than 5,000 batches over two days. The 131-foot dish of deliciousness weighed more than 50,000 pounds — that’s more than 25 tons. Nardi and his team named the pizza Ottavia, after the first Roman emperor, and topped it with 220 pounds of lettuce.

DHL Express had the honor of making the largest pizza delivery on July 4, 2012. U.S. forces in Afghanistan were surprised with 30,000 pizzas from Great Kitchens and Pizza 4 Patriots, an organization that wanted to give the country’s servicemen and servicewomen a “slice of home.”

Cheese lovers rejoiced when an Oregon pizza parlor introduced their Centouno Formaggio pizza, which translates to “101 cheeses” in Italian. The team was inspired to create the cheesy pizza in honor of “Teenage Mutant Ninja Turtles,” which once featured a 99-cheese pizza.

New York City boasts the most expensive pizza in the world. If you’re a fan of black squid ink dough with some white Stilton cheese, foie gras, platinum Ossetra caviar, truffles, 24k gold leaves and some optional Almas caviar, head to Industry Kitchen. Remember to bring your wallet though — it’s $2700, without the tip.

Pizza Hut claims the title of highest altitude for a pizza delivery. The general manager of one of its locations hiked to the top of Mount Kilimanjaro — which is more than 19,000 feet high — for four days with a large pepperoni pizza. The team gobbled down the pizza in celebration upon reaching the mountain’s peak.

More than 10,000 pizzas were baked in 12 hours by a team of 56 bakers in Italy. A smaller team in Australia produced more than 7000 pizzas in 24 hours, while a Domino’s Pizza employee in Ohio created 206 in one hour.

If you’re not feeling like topping your pizza with caviar and want a simple delicious, thin-crust pizza, visit us at Tasty Pizza. We serve savory plain pizza or pizza with any topping you choose. Order online and pickup or come in and sit down for the tastiest pizza in town.