A Look at Different Styles of Beer for International Beer Day 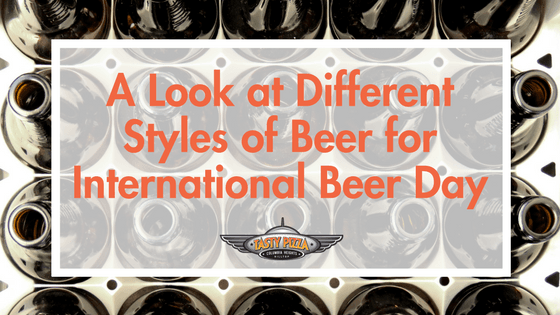 International Beer Day is celebrated in more than 200 cities across the globe — and here at Tasty Pizza, we’re happy to raise a toast and rejoice in the unmatched greatness of beer. To celebrate, let’s take a look at the different styles of beer that stem from ales and lagers.

Ale is the parent to several types of beers. It’s brewed at room temperature with top-fermenting yeast and has a fruity and spicy flavor. Ale also breaks down into different styles, including stouts, wheat and India pale ale (IPA):

Lagers are brewed with a bottom-fermenting yeast and are stored at cooler temperatures — that’s the difference between lagers and ales. Lagers offer a clean, crisp taste that highlights the flavors of the hops and malts. Different types of lagers include pale and dark lagers, as well as bock:

Whether you’re a fan of lagers or ales, we offer both at Tasty Pizza — plus delicious, thin-crust pizza that’ll complement your choice of beer, no matter what it is. Visit us to try our locally brewed craft beer and freshly made pizza while you watch the latest UFC match.