A Brief History of Beer in America 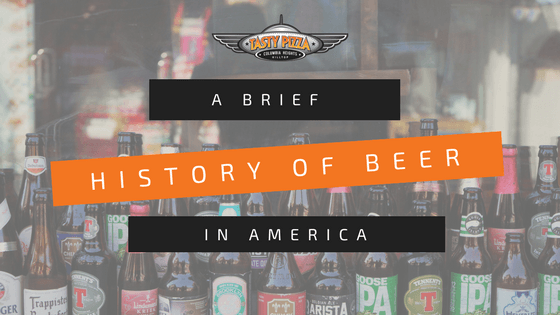 It should be no surprise that beer has had a presence in America since its first settlers arrived in Virginia in the late 1500s. But did you know early attempts of brewed beer were undrinkable? Or that several of the founding fathers brewed their own beer at their estates? Explore a brief history of beer in America below.

Beer was a staple in early America because it was considered a clean source of drinking water. The Virginia settlers first started brewing beer using corn, but the batches they developed weren’t good. England shipped barrels of beer to the colonies and signs were placed in England trying to encourage brewers to start settling in the New World. In 1612, Adrian Block and Hans Christiansen opened the first known brewery in New Amsterdam — now known as New York.

Once colonies were firmly established, settlers were able to gather and grow the necessary ingredients to properly brew beer like barley, wheat and hops. From there, more breweries started popping up in New Amsterdam, Rhode Island and Pennsylvania. Colonists could also start establishing taverns — the first being in Boston by Samuel Cole.

Did you know that not only did George Washington have his own brew house on his estate, but in 1754, he first recorded his own recipe for beer? In addition to Washington, Thomas Jefferson had his own brewery, and John Adams owned and operated a commercial brewery. During the Revolutionary War, beer was even given to soldiers as part of their daily rations.

To encourage beer consumption and with the hope of establishing a brewery in each state, in 1789, James Madison suggested an eight cent tax on each barrel of malt liquor — hoping a low tax would increase beer manufacturing. In the 1800s beer and liquor was a major aspect of the American economy. By 1870, 6.6 million barrels of beer were being brewed in America.

Beer remained a popular staple in American culture until the early 20th century with the passing of the 18th amendment, prohibiting the manufacturing, distribution and sale of alcohol. During this time, citizens turned from beer and wine to other distilled beverages, and criminal activity increased, despite the amendment’s original intentions. Prohibition was repealed with the passing of the 21st amendment in late 1933.

From there, other beer innovations popped up like cans in the early 1930s, the pull-tab can in 1965 and the beginning of home brewing — a law passed by Jimmy Carter in 1978.

Join Us for a Beer at Tasty Pizza Today

If you love and appreciate the history of beer in America, then join us for a cold one at Tasty Pizza in Minneapolis, MN. We have 18 beers on tap from local craftsman — all pair perfectly with the tastiest pizza in town! Visit us online today to view our full menu and to check out a list of our weekly events, including bingo and trivia.