We will be closed on July 4th to celebrate this great day!

Order your pre-cooked pizza and freeze or refrigerate for next-day cooking. Oven bake or grill our wings – just some ideas to make your Fourth of July fun!

A Brief History of Pizza 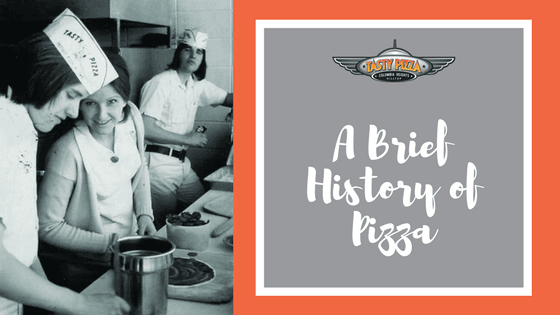 The warm oven aroma of sizzling cheese, sauce, and toppings is familiar to us all. There isn’t an American home that hasn’t experienced the delights of pizza. Whether it’s a midweek treat for the kids, girls’ night out or Super Bowl Sunday — mouth-watering pizza is the order of the day — every time!

But have you ever wondered how this pizza craze took off in the U.S. in the first place?

Around the turn of the last century, four million southern Italians made “The New World” — principally New York and its boroughs — their home. They brought peasant culinary traditions with them.

Home-style (“casalinga”) pizza was a popular and inexpensive staple in these early Italian immigrant homes. The art of pizza-making was something the Italian immigrant women had learned by mama’s side back in the old country. Now, it was set to become a hit Stateside as well.

In 1905, New York City granted Gennaro Lombardi the first pizzeria license in the U.S. and with that, the first "Tomato Pies" were sold in his grocery store at 32 Spring St, in the borough of Manhattan. The location is now recognized in the Pizza Hall of Fame as the first establishment to be granted a pizzeria business license.

He blazed a stretchy trail of cheese across the east coast, as more pizzerias followed:

World War II American GI’s — who had been stationed in Italy — were spoiled on the cheesy manna while overseas and wanted more of it on their return. One of them, Ira Nevin, smitten by his love for wartime pizza in Italy and skilled in oven repair at his father's business, invented the first gas-fired "Bakers Pride" pizza oven. Pizzas could now be made cleanly, quickly and efficiently — an oven door of immense opportunity for aspiring pizza retailers.

And they ran with it.

For the next 20 years, pizzerias popped up all over the country, most of them independently operated by Italian and Greek Americans who put their signature spin on the crusty pie.

Unlike popular American favorites such as hot dogs, meatloaf and hamburgers, pizza became the default communal meal. Many pizzerias back then didn’t offer slices, so the pie was shared among friends: Workers on their lunch break, families out for a tasty, inexpensive meal or sports teams after a game. As a cheap, yet quality all-in-one meal, it hit the spot every time.

So, next time you bite into a slice of Tasty Pizza, you’ll do so a little better-versed in its multi-sliced American history.